Hokusai Katsushika is one of the most celebrated ukiyo-e artist of Edo period. He had a great influence over artists like Claude Monet and Vincent van Gogh just to name a few. Hokusai is the best known for ‘Thirty-six Views of Mount Fuji’ and I bet you would have seen his works somewhere. What is not widely known is that he had a daughter, Oui Katsushika, who was as talented as her father. What’s more, it has been suggested some of Hokusai’s works were done by her. So who is this woman behind the great master?

Oui Katsushika was an ukiyo-e artist of the late 19th century Edo period. While her birth and death dates are not known, it is said that she was born when Hoksai was 37 years old (1800) as his third daughter. She was married to fellow ukiyo-e artist, but the marriage did not last. She was considered not beautiful that even her father referred to her as crooked chin. It is also said that she was blunt, more manly than feminine. And it didn’t help that she inherited her father’s odd personality along with the artistic talent. Her husband divorced her after 3 short years when she laughed at his art work pointing out flaws. 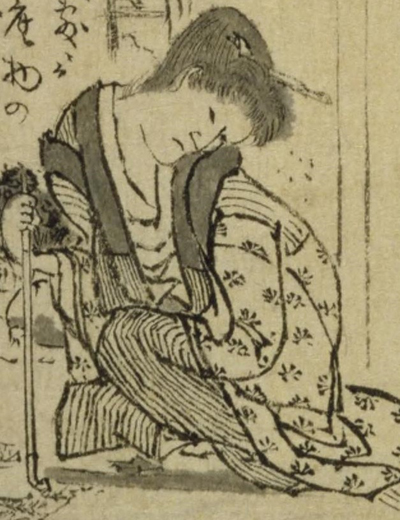 Oui returned to live with her father Hokusai after her divorce in 1827. Then, she had remained by her father’s side as an assistant throughout his career till the end. One of Hokusai’s pupils described her as having an eccentric personality like her father who was well known for his strange behaviors. It is said that Oui didn’t even stand up to make a pot of tea (which was considered a woman’s work) when a guest came by their house that their neighbor had to help. As a matter of fact, the two artisans only cared about their art creations. Nothing else.

They ate out or had takeout for all of their meals and would leave the food containers lying around the house. They rarely moved from the spot once they sat to work. They never cleaned their living space that there were spider webs inside the house. They were also careless about money and never became wealthy. Although Hokusai was getting payed more than the average for his works, he would receive payment without checking the amount they receive. When they were to settle their monthly payment, Oui would watch her father throw a bundle of money lying around the house without checking the amount and never seemed to have cared enough to count the money. They cared too little about anything else beside their art works, so they had to move out of their houses close to 100 times when clutter in their living space became too much to handle.

Despite their living situation, Oui continued helping her father’s work and perfecting her own skills. It is said that Hokusai had told people that his bijin-ga (portrait of beautiful women) is no match for Oui’s. When she is mentioned with her father, she is often called ‘female version of Hokusai,’ but it is obvious that she was more than just a copy. She was an accomplished artist in her own right.

It is said that Oui acted as a ghost painter for Hokusai’s portraits of women and that she also helped him with his colorings. Now we may never know how much of Hokusai’s work were actually done by her. But she had left pieces of her own. Despite the fact there are only 10 of Oui’s works in existence as far as we know today, it is enough to prove she indeed was another genius!

Courtesan, geisha and townswoman sitting and playing musical instruments together. Their playing a music together would be unrealistic in real life considering they all came from different classes. She succeeded in creating a sense of motion by rhythmically placing each woman’s hand on instruments and colors on their kimono. It also shows us how women of each class dressed and wore their hair differently.

・Girl Composing a Poem Under the Cherry Blossoms in the Night

A young woman composing a poem under cherry blossoms. She is wearing furisode (long sleeve) kimono which is traditionally worn by women before marriage. Though unmentioned what sort of poem she’s composing nor if it’s addressed to certain person, cherry blossoms represents evanescence and it steers our imagination. Edo period was the time when pop culture truly flourished and art, play and literature become common practice even for commoners. The contrast of light and shadow is expressed beautifully. Several colors are used to show different brightness of stars to further perfect the details too.

・Night Scene in the Yoshiwara

Striking and tantalizing work of art revealing a scene at Yoshiwara teahouse. Another work that showcases Oui’s technique that uses contrast of light and shadow. You could only imagine the shock it brought to viewers at the time considering the fact it was more of a Western technique and it was quite unique approach for people to see especially during the time of isolationist foreign policy. In the darkness of night, there is a courtesan’s face illuminated beautifully in the back of the room framed with vivid color of kimono. Oui’s signature is hidden within the image;. ‘O’ ‘u’ ‘i’ on three separate lanterns.

What Oui captured in her work

In recent years Oui is often called ‘Rembrandt of Edo period,’ because she mastered to capture light and dark which was not common method in Japanese art. So what did she try to display through her creation? What can we take away from her art? Ukiyo-e translates as ‘pictures of the floating world’. It is a genre established in Edo period to capture people’s daily lives and customs. Edo period is characterized by economic growth and peaceful time with no more wars and people enjoying art and culture. One of the understanding might be that this is what Oui wanted to capture. People’s lives and uncertainty of it.

Oui lost her mother in her twenties and father as well in her forties. She was divorced without a child and she is said to have never remarried. She experienced the great earthquake that killed so many lives and the great fire that completely destroyed the scenery of Edo. She had gone through loss what she love. She also saw how people woke up every day to live their lives, how they kept their hopes and dreams high, and how courtesans kept their poise in their rather short lives in Yoshiwara red light district to sell dreams even for a brief moment. Maybe she wanted to capture brightness and darkness of lives and needed the only visual way to express light and shadow of this floating world (ukiyo) we all live in so that it till would speak to us more vividly. When we look at Oui’s ukiyo-e, we’re reminded of how everything is in transition at all time. Then we learn the meaning of what we have been given to us.

After Hokusai passed away at 90 years of age, Oui left the house and was never seen. She was in her sixties. Her whereabouts and status became unknown. What she found at the end of her journey remains mystery. Still we are blessed to have even a small collection of her ukiyo-e to remind us of human strength that we draw out each day through ebb and flow of life.

「Risuke Fukahori Who Can Create Goldfish」